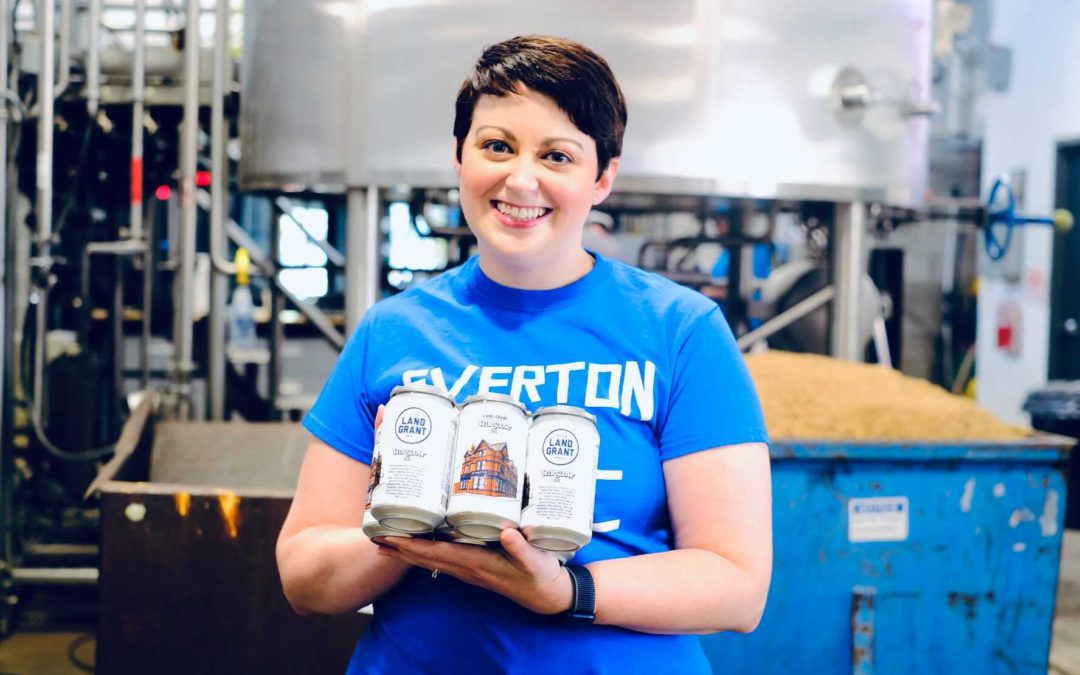 In the summer of 2020, the auction site Everything But The House pulled together a small business relief action filled with “Uncommon Experiences” throughout the Columbus community in celebration of the relaunch of EBTH Columbus. EBTH committed to distributing 100% of all sale proceeds directly to the purveyors and their team of employees, and one of the auction items available was to “Brew a Personalized Batch with the Land-Grant Brew Team.”

In addition to collaborating on the beer style and recipe with one of our brewers and working with our design team on a name and label design, the winner of this experience would get to spend the day brewing their beer and learning about the brewing process. Much to our delight (and with deep appreciation) – our new friend-of-brewery, Emily, generously made the top bid for the experience and was finally able to redeem it now that CDC restrictions have been lifted.

Dr. Emily Anzicek, a teaching professor in the School of Media and Communication at Bowling Green State University, developed her love for good craft beer organically during her time in grad school. When she would go out with friends, she would make an effort to try different things from what everyone else was drinking – ultimately discovering the complex, flavor profiles of Michigan’s craft beer scene.

“I’d try one and think, ‘This is actually really great and it doesn’t taste like water!’,” Emily said of her foray into craft beer. “It just sort of snowballed from there and now I don’t drink macro anything; I’m a craft drinker through and through.”

While Emily said her husband David isn’t much of a drinker, she said that they love to travel and explore new places with their daughters by way of the local watering holes.

“My girls are 10 and 11 years old, and could tell you in any given city which taproom is the best suited for kids – everything from if it has the best activities to which spot has the best burger.”

Having dabbled in some homebrewing herself, this Everything But The House Experience seems like it was custom made just for her.

“The things that make me happy in the world are restaurants and taprooms, so I was looking for ways to support those types of places during the pandemic because my life would be so diminished without them.”

Emily noted that she and her husband put aside some money last summer to donate to places they knew needed help.

“Land-Grant is my absolute favorite brewery and the Beer Garden is my favorite spot in Columbus, so when I saw the auction on social media last summer, I was determined to not let anyone beat me on my bid,” Emily said.

And beat her, they did not! Emily’s winning offer was one of 36 total bids that was vying for the brewing prize, but she came out on top. She redeemed her experience this past June, spending the day working with our brew team to create her dream ultra hoppy IPA. Emily’s beer was all-in on being big and bitter, brewed with Galaxy, Simcoe, Amarillo, Centennial, Loral, and Columbus hops for tons of hoppy flavor and a high IBU count.

When it came time for Emily to dream up a name for her IPA, the inspiration came pretty naturally.

While Emily and her family split their time between Columbus and Bowling Green, one of their family’s biggest passions is located across the pond. As Everton Football Club fans, Emily and her family have traveled to Liverpool twice to see the team play at Goodison Park. (Not to mention, they’re season ticket holders to The Crew, too!)

Emily chose the name Winslow for her IPA to pay tribute to The Winslow Hotel – The People’s Pub located in Liverpool. Just steps away from the home of her beloved Everton FC, The Winslow’s iconic brick exterior made for the perfect contrast against the crisp white and royal blue of Everton FC.

“They are the friendliest people you’ll ever meet,” Emily said of the staff at The Winslow. “It’s the perfect tribute.”

Winslow IPA is now available to enjoy in the Taproom & Beer Garden and in 6-packs for carryout. Give this big, hoppy IPA a try today before it’s gone!