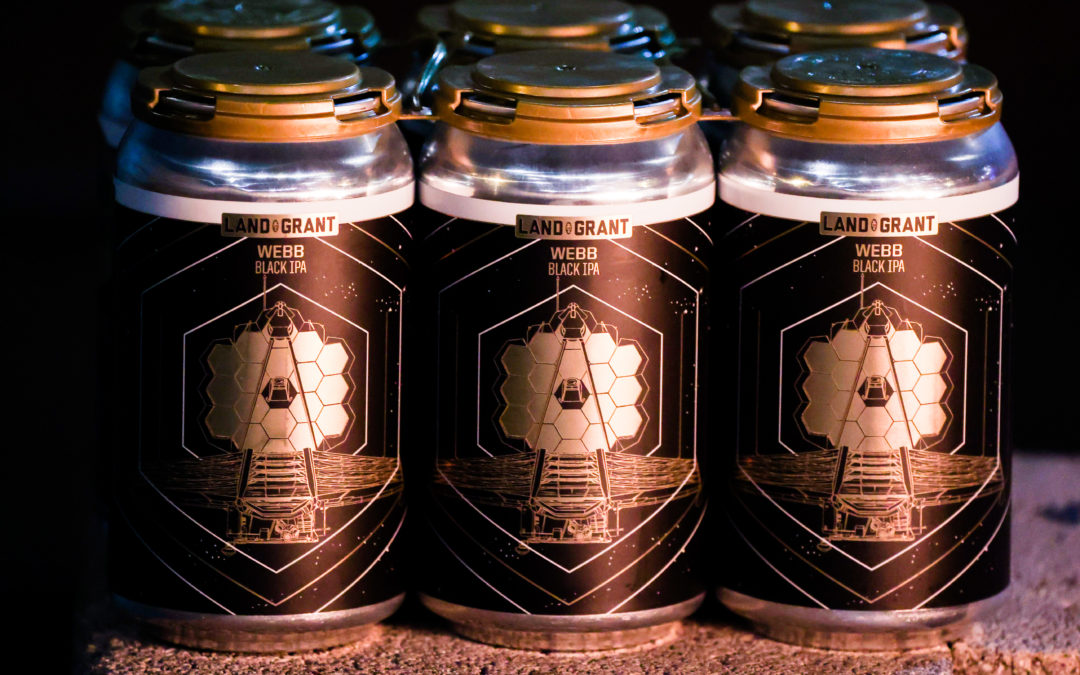 As the ninth beer in our series of space-themed beers, we are excited to release Webb Black IPA – named in honor of NASA’s James Webb Space Telescope. Our annual “Space-Grant” series seeks to celebrate the spirit of space exploration and discovery through the release of deep-space-black IPAs, and is named for an aerospace-focused spin-off of the Land-Grant University program.

Our release of Webb Black IPA, which is occurring mere weeks after the James Webb Space Telescope was launched into orbit, pays timely homage to NASA’s scientific successor to Hubble. At more than 100 times more powerful than Hubble, the Webb telescope will be able to tell us more about the birth of galaxies, stars and planets further back in time than ever before.

When it came to planning for this year’s release, Land-Grant’s President and Co-Founder, Adam Benner – who has had an affinity for space exploration from a young age –  knew right away that the beer had to showcase NASA’s James Webb Space Telescope.

“I remember, as a kid, saving the front page of the newspaper when they published in color the Pillars of Creation from the Hubble Telescope,” Benner said. “We are all just as excited to see what new discoveries come from the JWST, so it was a no-brainer to honor it through this year’s Space-Grant beer.”

Webb Black IPA embodies our mission of community, education, and storytelling through its masterfully crafted recipe and beautifully designed packaging. Webb’s sleek, matte black and shiny gold-foiled label depicts the James Webb Space Telescope and the 18 hexagonal segments that make up its mirror, and a small blurb about the incredible instrument for customers to read. As for the beer itself, though the recipe differs from past Space-Grant brews, our Head Brewer Dan Shaffer did draw some inspiration from the recipe of the 2017 Space-Grant release, Godspeed.

“Having done a coffee variant the last two years, we were excited to return the black IPA to its truest expression with this recipe,” Shaffer said. “The malt bill was based on my favorite Black IPA, and we paired Galaxy hops with Amarillo and Mosaic cryo hops in a stripped-down version of Godspeed’s hop schedule to create a lightly sweet and firmly bitter brew with tropical, citrus and cocoa notes.“

Space-Grant Webb Black IPA is now available in our Franklinton taproom in downtown Columbus, and in select craft beer retailers around central Ohio. It is also available to order online, but shipping is limited to the state of Ohio. Webb Black IPA registers a 8.2% ABV and retails for $11.99/six pack. You can also learn more about Webb on Land-Grant’s Beers with the Brewers Podcast, available to stream wherever you get your podcasts, or through the player below.