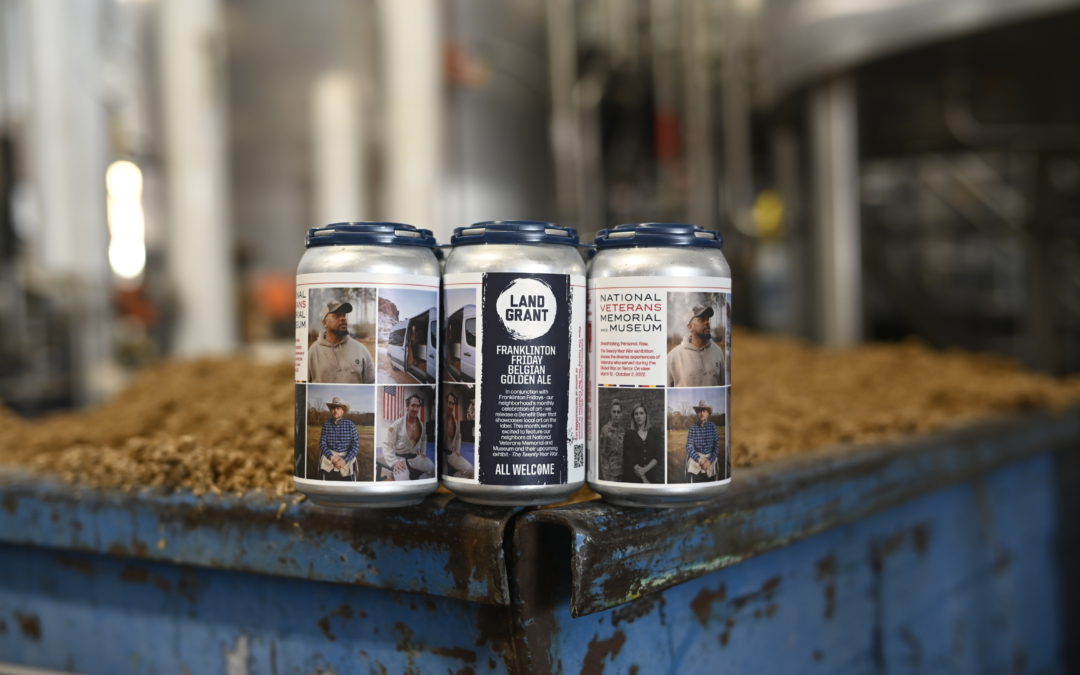 We consider ourselves very lucky to be located in Franklinton, a neighborhood that is home to abundant and authentic art, culture and talent. On the second Friday of each month, we have a community-wide celebration called Franklinton Fridays, where area businesses and galleries open their doors to encourage visitors to come to Franklinton and experience all of the creativity and talent that surrounds us.

Our March Franklinton Fridays Benefit Beer has a slightly different perspective on featuring local art – this time, by highlighting a new exhibition coming to our Franklinton neighbors at National Veterans Memorial and Museum. NVMM is the only museum in America that honors all Veterans from all branches of service – telling their stories through several expressions of art, including photos, multimedia presentations, interactive exhibits, and displays featuring letters and personal effects.

“We are thankful for the opportunity to share our newest exhibition with our community in Franklinton through collaboration with Land Grant’s dedicated and creative team,”

NVMM’s forthcoming exhibition – The Twenty-Year War: Our Next Greateset Generation – shares the diverse experiences of Veterans who served during the Global War on Terror. Co-authors and U.S. Army Ranger Veterans Dan Blakeley and Tom Amenta, with photographer Beau Simmons, compiled the portraits and powerful, personal and authentic stories of these Veterans for an eye-opening insight into their experiences – both then and now – after fighting in a conflict that spanned two decades.

The exhibition will feature 20 large-scale color and black-and-white Veteran photographs and stories, a display derived from the 71 American service members’ stories featured in a book of the same name – which was released in 2021 during the 20-year anniversary of 9/11.

“Franklinton Friday is about artistry, learning, impact, and connection. I think what’s so unique for the NVMM is that this exhibition [The Twenty-Year War: Our Next Greatest Generation] shares the individual and collective stories of veterans who continue to serve and impact their local communities; they are the entrepreneurs, creatives, artists, writers, thinkers, and ‘doers’ of their own home towns – an common thread exists.”

Our March Franklinton Fridays label features five of the Veteran portraits taken by Simmons as part of “The Twenty Year War” series. Simmons, who has worked as a professional photographer since 2009, cut his teeth doing photography in the fashion industry, but has spent the last 12 years of his career pursuing his passion for capturing Americana and the wonder of Western lifestyle. through his distinctly classic look of working exclusively  medium format film. It was when Simmons reconnected with his childhood friend – Dan Blakeley – that they,  together with U.S. Army Veteran Tom Amenta, founded United Valor and produced the book “The Twenty Year War”.

“The opportunity to feature The Twenty-Year War: Our Next Greatest Generation exhibition on a Land-Grant label for Franklinton Friday is incredible. We hope that those who hold the can and enjoy the beverage are inspired by the portraits and explanation of the exhibition, and will be compelled to visit the exhibition at the National Veterans Memorial and Museum and see the entire exhibition firsthand,” he continued. “We hope they will feel the connection to America’s veterans who have served and fought in America’s longest war.”

The label will adorn cans of our small-batch Belgian Golden Ale – which releases on Friday, March 11 in conjunction with Franklinton Friday. Members from the National Veterans Memorial and Museum will be in the Taproom, along with the Simmons, Blakeley and Amenta, as well as several other Veterans to celebrate the impending opening of The Twenty Year War exhibition. NVMM will also have copies of “The Twenty Year War” photo journal book available for sale in the Taproom at this time.

The Twenty-Year War exhibition privately opens Saturday, March 12 through a ticketed event, and can be viewed publicly with Museum admission Sunday, March 13 through Sunday, October 2. You can learn more and plan your visit at NationalVMM.org. You can learn more about how United Valor connects civilian and Veteran communities through storytelling and organizational engagement by visiting WeAreUnitedValor.com.