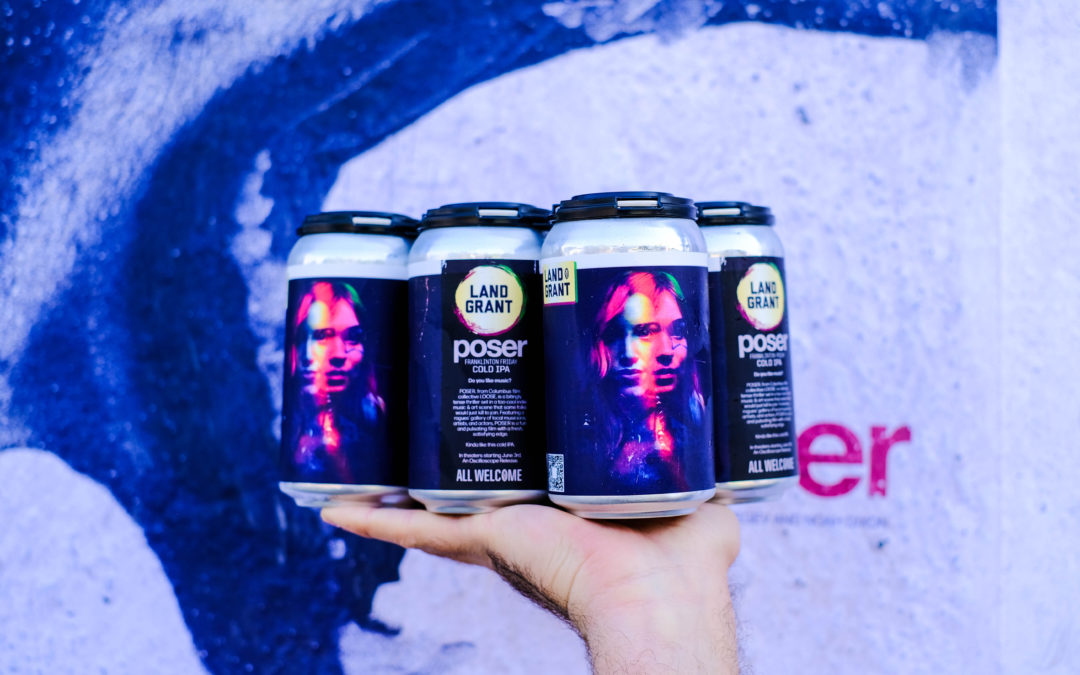 Our May Franklinton Fridays Benefit Beer features artwork from the soon-to-be-released feature film, Poser – which is set in Columbus’s real life indie music scene, as it features several real musicians from Columbus.

The Poser label adorns cans of a limited edition crisp and dry Cold IPA – brewed with Mosaic, Citra, Huell Melon, and Cashmere hops – that will be released on Friday, May 13th

“I thought a Cold IPA would be an appropriate style to associate with a film about wanting to be an insider in an exclusive scene since ‘Cold IPA’ is a divisive and esoteric subdivision of India Pale Ales,” said Land-Grant Head Brewer Dan Shaffer. “I wanted to revisit this quad-hop combination using some additional hopping techniques, and it deliciously resulted in an IPA that’s both tropical and resinous, yet crisp and dry like a Pilsner.”

We’ll be celebrating the release of Poser Cold IPA during Franklinton Friday on May 13, with Calamari spinning from 6:30-9:30pm.

Filmmakers and Denison University graduates Ori Segev and Noah Dixon, both of whom work as Creative Directors at the Columbus-based film production house Loose Films, made their feature-directing debut with Poser. The film features Columbus artists like Mungbean, Joey Aich, Son of Dribble, WYD, Devin Summers, La Poré, the Roof Dogs, OG Vern  – and Bobbi Kitten, of the band Damn the Witch Siren, who portrays a fictionalized version of herself in the film.

Having an official ‘Poser Beer’ is one of the wildest outcomes of making our first movie,” the team from Loose Films said. “We think we’ve officially ‘made it’ and can finally retire now; we’ll spend out the rest of our days drinking this fine brew.”

FILM SYNOPSIS: Wallflower Lennon Gates (Sylvie Mix) yearns for access to the inner sanctum of the underground music scene in Columbus, Ohio. When she creates a podcast to interview the local artists she adores, Lennon discovers her own musical ambitions, develops a fast friendship with the striking, confident performer Bobbi Kitten, and in the process creates an identity not wholly her own. Soon, Lennon’s aspirations, with some constructive coaxing from Bobbi to find her voice, lead her down a path of dark obsession.

Poser first premiered at the Tribeca Film Festival last year, where it was one of six films chosen to compete in the U.S. Narrative Competition program out of more than 4,000 submissions. It made its way throughout the festival circuit, and now with distribution by Oscilloscope Laboratories, Poser will now be making its U.S. theatrical release next month.

Poser’s Ohio theatrical premiere will take place at Gateway Film Center on Thursday, June 2 at 8:00pm – and will include an opening night party in the festival lounge. The Poser cast and crew will be in attendance at the 8:00pm showtime on the following evening (Friday, June 3) – following which they will gather for an afterparty here at Land-Grant. The Poser afterparty (Friday, June 3 from 10:00pm to 1:00am) is free and will feature music from DJ Satele.

Music from the original motion picture Poser will also be performed live and in person at “Poserfest” on Friday, June 10. This event will be hosted in two Columbus music venues – A&R Music Bar and The Basement – featuring performances by WYD, Mungbean, Joey Aich, Son of Dribble, Devin Summers, the Roof Dogs, OG Vern and La Poré.