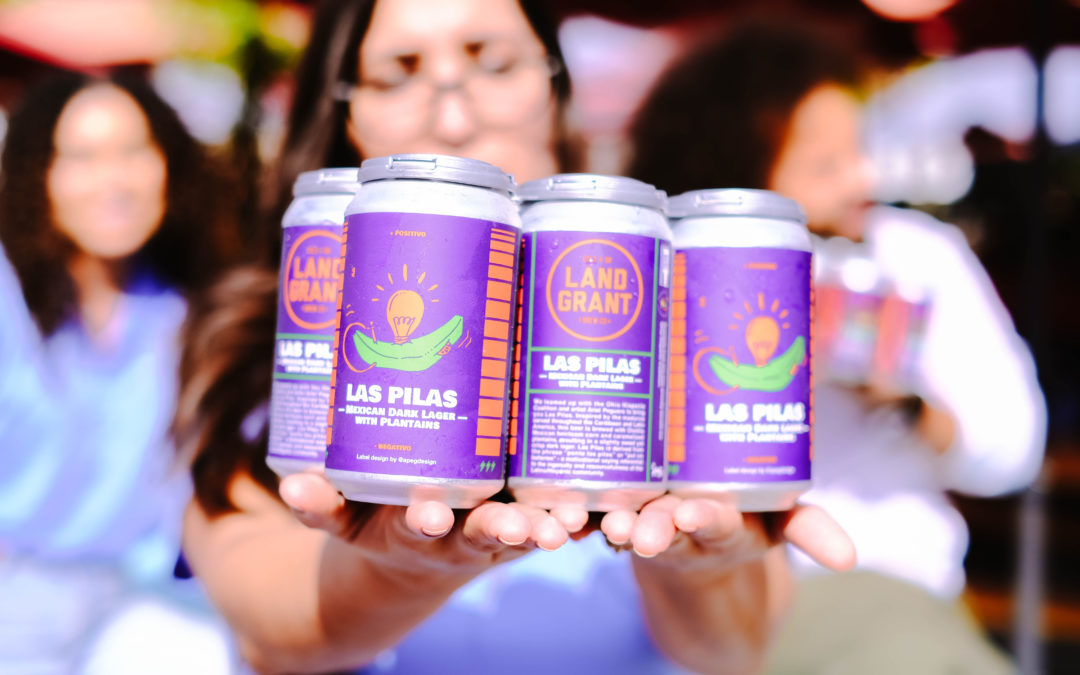 As we’ve worked with our friends at the Ohio Hispanic Coalition over the last several months to collaborate on a Benefit Beer that could help raise awareness of OHCO and celebrate Hispanic Heritage month – we are really excited to share it with everyone. With the help of the team at OHCO, local artist Ariel Peguero (Apeg) and our head brewer, Dan Shaffer – Las Pilas Mexican Dark Lager with Plantains was born.

We all gathered together back in July to do an OHCO-led taste-test of several foods and flavors very present throughout Hispanic/Latino cultures to inspire a recipe and direction for the beer collaboration with our head brewer, Dan. Our collective goal was to create a beer that was unique, but still approachable – and as we talked through each item in the tasting, everything kept coming back to the plantains.

Plantains, which are a less sweet and starchy banana, are found in tropical areas and account for about 85% of all banana cultivation worldwide. They are one of the most highly utilized types of produce throughout Latin America, and are commonly thought of as the “Latino potato” with how versatile they are as a staple in the kitchen – regardless if the dish is savory or sweet. Many people know plantains from one of the most common Latino side dishes – maduros. Maduros are fried, ripe plantains coated with caramelized sugar that offer a custard-like texture and the familiar sweet notes of banana.

With lagers and other lighter beer styles more commonly found in many Latin American countries and their warm climates, Dan developed a dark lager recipe into which he worked Olotillo Mexican heirloom corn masa flour and caramelized plantains in with the malts to create a crisp, toasty mahogany-colored lager with aromas of tortilla chip, baked bread and subtle banana (plantain). Thirty pounds of plantains (and a whole lot of plantain-peeling patience) later…Las Pilas was brewed.

The name of the beer – Las Pilas – is derived from the motivational Spanish phrase “Ponte Las Pilas,” which is commonly used among Latinos. While in English, the literal translation is “put on batteries,” the phrase is used to encourage someone to work harder, do their best, or pay attention – similar to English phrases of “Get it together!” and “You can do this!” all in one.

The visual representation of “Ponte Las Pilas,” as conceptualized by artist Ariel Peguero, pays homage to the classic science experiment of lighting a lightbulb with a potato, except in this instance – its the “Latino potato” – a plantain. The visual also leans into “Ponte Las Pilas,” as plantains are not only a source of energy to the Latino culture, but also fuel the Latin American economy. Furthermore, the concept also represents Latino advancements in STEM-related (science, technology, engineering, math) careers and roles, rather than only the mainstream depiction of Hispanics/Latinos as artists and musicians.

The Ohio Hispanic Coalition (OHCO) is the only multi-service, community-based 501(c)(3), Latino/Hispanic non-profit organization in Central Ohio. Established in 1990 as a volunteer-based organization, founder and current President/CEO Julia Arbini-Carbonell partnered with other Latina leaders to address barriers such as language, culture, immigration status, and a lack of access to services and programs that are culturally and linguistically-fitting – impacting the most vulnerable among the Latino/Hispanic communities in Central Ohio.

OHCO is continually growing, with over 154 staff members and volunteers involved in enhancing services that promote general awareness, including social, educational and economic advancement of Ohio’s Latino population. For more information about programs and other services offered by OHCO, please visit http://www.ohiohispaniccoalition.org/ or follow them on Facebook, Instagram and Twitter.

Ariel Peguero – or Apeg, as much of the community knows him – is a graduate of Columbus College of Art and Design who has called Columbus home for more than ten years. Known for incorporating augmented reality (AR) into his work, Ariel has showcased and shared his talents at 934 Gallery’s annual 934 Fest over the last few years, painting an AR mural and working with other muralists to create an augmented reality experience for their pieces.

“The augmented reality aspect to my artwork started a handful of years ago,” Ariel said. “The most popular application has been the augmented reality mural. The sheer scale of some of the pieces really adds an element of magic to the experiences that can’t quite be explained.”

Check out some of his AR mural work from last year’s 934 Fest here.

Augmented reality murals are just the tip of the iceberg with Ariel’s artistic talents, work he describes as a focus on curating experiences and building engaging, interactive and unique campaigns around them. His expertise in the Adobe Suites allows him to blend platforms and create iconic visuals that have proven impactful to brands like Pepsi, Hollister, Abercrombie & Fitch, Nationwide Children’s Hospital and Woodford Reserve.

Because Ariel enjoys working across several mediums, his process for designing this label was no exception. The creative for collaboration beer originated in three different forms – one as a sketch, one as a digital graphic and one as a painting.

Ariel worked closely with OHCO on the various names and designs for the beer, ultimately feeling inspired by the origin of the name “Las Pilas” and the power of the plantain throughout Latino culture.

“Like a battery – the plantain has been the driving force for a lot of Latino communities and that’s why I wanted to show it on the can,” Ariel said of his label design. “The can itself is supposed to look like a battery, too, when you look at the image of the plantain as a whole.”

“Ponte Las Pilas” this Friday and re-charge with the release of our Las Pilas Mexican Dark Lager with Plantains at our Taproom and Beer Garden in honor of Hispanic Heritage Month! Las Pilas will be available on tap and in six-packs for carryout, and 100% of the proceeds from its sales will benefit the Ohio Hispanic Coalition.

In addition to releasing Las Pilas on Friday, DJ Chris Bell will be spinning salsa music starting at 6:00pm, and members from the Ohio Hispanic Coalition will be present to provide more information about their programs and other services offered by OHCO.