The Beer In My Food: Webb Black IPA “Beerbacoa” Nachos 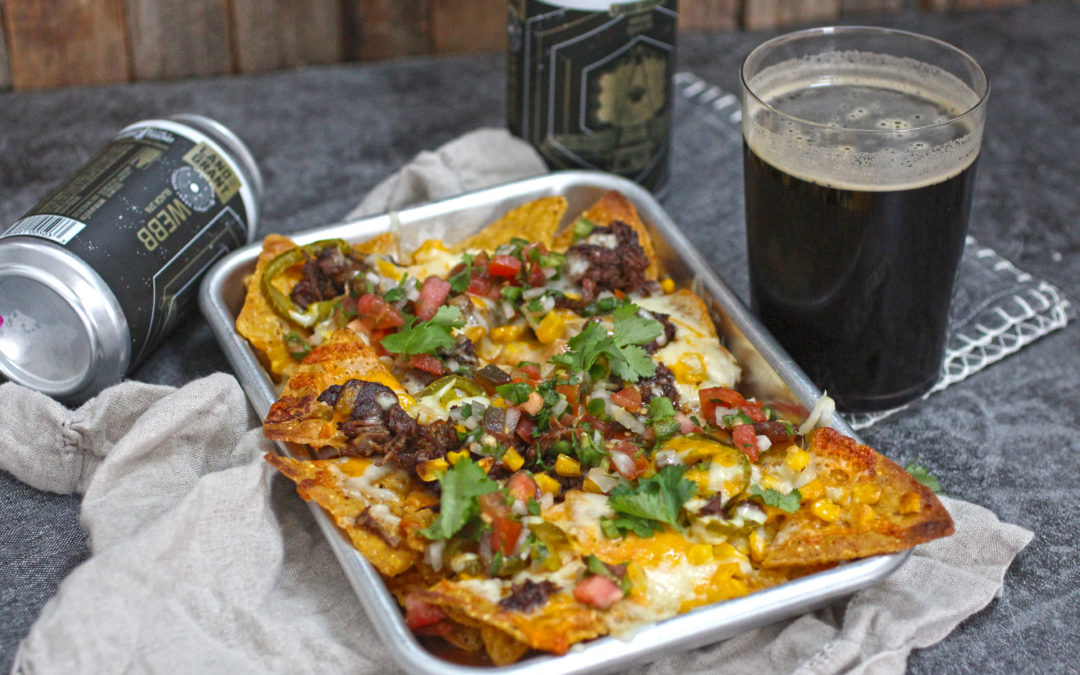 A Land-Grant Collaboration with The Food In My Beard

In an effort to bring you creative, must-try recipes that incorporate Land-Grant beers into your cooking, baking and cocktailing – we’ve been collaborating with Columbus-based cookbook author and blogger, Dan Whalen. Known for playfully crafting unique flavor mash-ups and turning them into must-try recipes on his blog “The Food In My Beard” – our series (aptly called “The Beer in My Food) takes does the same thing with Land-Grant brews.

In celebration of the release of his latest cookbook – Nachos for Dinner – Dan incorporated Webb Black IPA, our most recent Space-Grant series beer, into his cookbook recipe for “Braised Lamb ‘Beer-bacoa’ Nachos” – with a lamb or beef version below.

We also invite you to join us in the Taproom this Sunday, January 16, from 2-5PM for Dan’s Nachos for Dinner cookbook launch party! Pop in and chat with Dan about his recipes and latest cookbook, copies of which will be available for purchase!

MAKE THE “BEER-BACOA”
1. Slice the meat into smaller chunks if needed. Sear on high heat with some oil to brown. Remove from pot.

2. Add the onions and cook about 10 minutes. Add the jalapeños and cook another 5-7 minutes to soften, and allow the onions to lightly brown. Add the garlic and cook 2 minutes.

3. Add the beer and return the meat to the pan. Add in the chipotle (smash it up with a fork a bit), cumin, oregano, vinegar, and honey. Bring to a simmer.

4.Cook about 4 hours stirring often. Cover for the first 2 hours, and then remove the cover to allow some of the liquid to evaporate. (Alternatively, you can do this step in the oven at 300º.)
5. When the meat is ready, mash it up with a potato masher. It should be tender enough to fall apart.

MAKE THE NACHOS
6. Preheat broiler to high.
7. Spread the chips in a single layer on a baking sheet. Top with half the cheese.
8. Add on about 1 cup of the meat with some of its juices. Top with the corn and the remaining cheese.
9. Broil for about 5 minutes until the cheese is melted and starting to brown.
10. Remove from the oven and top with the pico de gallo, cilantro, and sour cream. Serve and ENJOY!

Be sure to post and tag Land-Grant and The Food In My Beard when you make one at home. If you’d like to find Land-Grant’s Webb Black IPA – part of their Space-Grant series – at a retailer near you, you can use our site’s Beer Finder tool here.

A Bit About Dan

As the founder and creator of the highly popular blog, The Food in my Beard, Dan has authored several successful cookbooks, including his newest release: Nachos for Dinner: Surprising Sheet Pan Meal the Whole Family Will Love. Dan’s Nachos for Dinner cookbook is available now!

He and his wife, Georgina, currently reside here in Columbus, where Dan works as a full-time blogger and writer. Keep up with his latest creations on his TFIMB blog or follow him on Instagram, Facebook and TikTok.